From the covid lockdowns to the war in Ukraine, the world has seen plenty of turmoil over the past few years. And we’re not out of the woods yet. Markets are interconnected so when one market tanks, others will tank too. This is at least true for the stock markets and crypto markets.

Thus we have seen BTC hit a new high of around 69k in November last year, before reaching 18k today, a very good bull market followed by a dramatic over 70% drop. It’s nothing too alarming in the crypto space, but one wonders what’s to come. To understand this better, we need to look at the bigger picture.

The current situation, with especially the stock markets hanging on the edge of a cliff will take time to play out, while sentiment adjusts to our new reality. Many people either don’t see what’s coming or don’t appreciate the seriousness of the situation, which puts us right in between complacency and towards anxiety. So what’s happening… and why?

There are probably better charts than the one I used above. The point is to make clear where we are in terms of sentiment, and that we probably have a long way to go before things will start looking up again. In this blog post I’ll try to briefly explain what I believe is happening, what our problems are right now, where things will likely go next and what effects this will have on the crypto markets. There is no way that this information is complete or even accurate, but the writing is on the wall and it’s important to be aware of the backstory before we dive in to trading futures.

Let’s start with the biggest problem of all.

It’s no secret that the US has been overspending ever since Nixon did away with the gold standard and the US could be as rich as it wanted to. Perks of controlling the world’s reserve currency through the printing press. And for 50 years, the US considered itself the richest country in the world.

However, everything comes at a price and it’s time to pick up the tab. The US has a national debt of 30.5 trillion that it will never be able to pay off. When it had to close its economy during covid, it printed tons of money to pay for two stimulus packages, worth around 5 trillion in total. All this new money in circulation means inflation and that’s just the start.

The war in Ukraine

The war in Ukraine has an effect on the world supplies of food, gas, oil, fertilizer and rare earth metals. Along with decades of money printing and overspending by the United States, which is the root cause, inflation is really taking hold. The chart below is the US consumer price index (CPI), the average price of a bundle of goods. This is an average, some prices have hiked more than others.

Cooling off the economy leads to layoffs (people losing their jobs), which in turn leads to lower spending and lower production, which leads to more layoffs, etc. This is called a recession. A prolonged and deep recession is called a depression. Some criteria exist to help us distinguish between a recession and a depression but it’s really the same thing, albeit with different intensity.

Raising interest rates also comes with another problem, which is the price of borrowing money for governments. When governments borrow money, they give out bonds to the lender. You can look at bonds as a piece of paper that gives ownership to a bit of government debt. Debt is an asset that can be traded, as the bond holder is entitled to a bit of interest (called Yield). 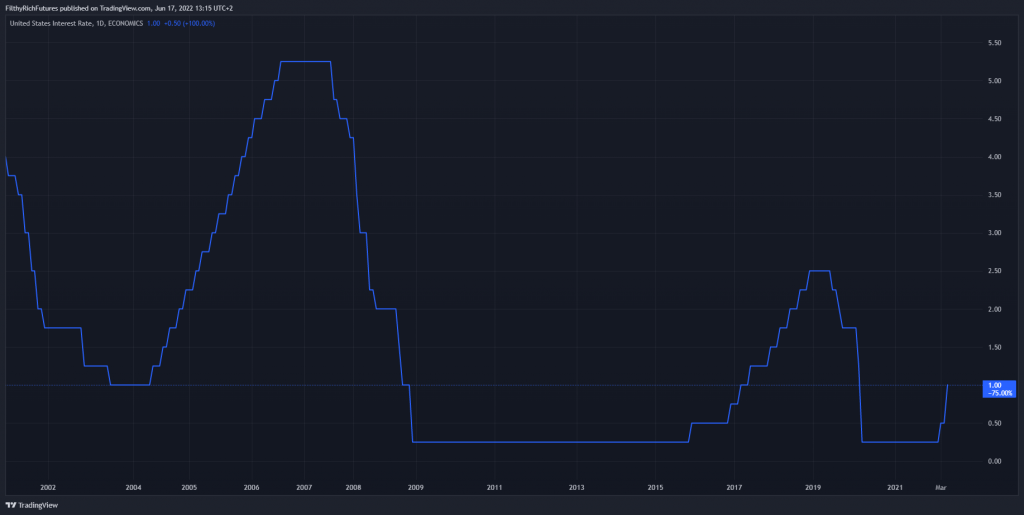 We are currently in a situation where central banks, specifically the Federal Reserve (FED), European Central Bank (ECB) and Bank of Japan (BoJ), are struggling. Raising interest rates puts economies and governments at risk. Governments that are at immediate risk include those of the United States, Italy, Greece and Japan, but others will follow. So, central banks have limited room for raising rates. However not raising interest rates may lead to runaway inflation problems, better known as hyperinflation.

The FED raised its interest rate by 75 base points (bps) this week and further interest rate hikes are expected over the coming months. The ECB held an emergency meeting earlier this week and decided to do nothing for the moment. Whatever they do eventually will have collateral damage.

In the mean time, sanctions on Russia are hurting those who imposed them (EU and USA) much more than those who they were intended for (Russia). Sanctions on oil and gas have led to shortages, driving up the price significantly. Russia is now exporting less oil and gas to the EU (but still significant amounts), while exporting more to India and China, leading to price hikes in the EU and US (main cause of inflation). To make things worse, Russia claims it could not take delivery of gas pumping equipment it uses for Nord Stream 1, resulting in yet less gas deliveries through Nord Stream 1 to Germany.

Germany is the EU’s strongest economy and is heavily dependent on what is now missing Russian gas. This will have great economic consequences over the coming months, especially as winter sets in.

For this reason and over the coming period of time, it’s highly likely that we will see stock markets decline, taking crypto along with it, and that’s clearly playing out today.

In fact, it is clear we are facing a recession and it looks very much like we’ll see stock prices drop to the levels of march 2020, if not lower. Inflation is unlikely to end soon and the same is true for the recession.

It’s not just oil, gas and food that are affected. The current crisis will expand across all markets, with the exception of commodities like gold and some others, that are often used as a hedge.

What does this mean for crypto?

Even though crypto has seen incredible returns in the last bull run when compared to the stock markets, crypto proves to be closely tied to stock market sentiment and sort of mimics stock market behavior at this point. Today, BTC is trading below 20k, resting on its 2017 ATH as support. Many crypto investors believe this is the bottom but as we have seen many times before, the hunt for stop-losses continues and in reality, the current BTC price level is unlikely to be sustained.

Is crypto going to the moon? No. But there will be craters. A potential price target for BTC would be 12k but we could well go lower. BTC is more oversold on the weekly RSI this week than ever before in its history. I would not be surprised if we saw 9k in the coming months.

One thing is fairly certain. As long as the war in Ukraine and its economic fallout continue, we we’re unlikely to see any type of real recovery, aside from some small corrections. When the war does end, we might find that we woke up to a multipolar world where America no longer dictates the rules. Crypto might take a long time to recover to its old levels, but most likely will recover eventually.

This is a good time for futures traders, provided we choose the right direction and manage our risk wisely. For those of us who are patient enough, there will be opportunities for spot trading and DCA, although great care must be taken to make the most out of this opportunity. I will post a new blog about just that very soon.